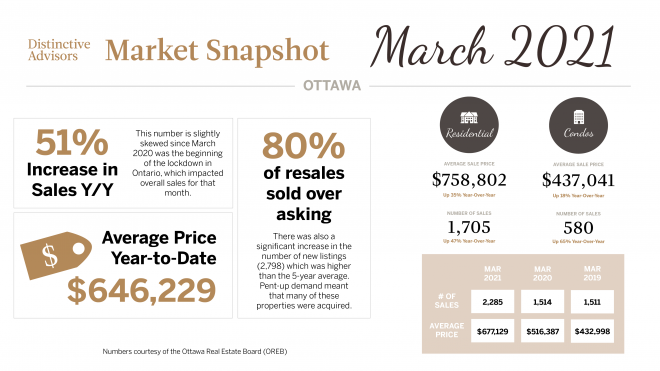 The March numbers for residential real estate in Ottawa are — once again — up from the previous month.

“There was a significant uptick in the number of new listings that came onto the market. This total (2,798) was higher than the 5-year listing average, which hadn’t happened since July 2020, when the first lockdown ended. Ongoing pent-up Buyer demand meant that most of the properties that came on the market in March were quickly acquired.” said Ottawa Real Estate Board President Debra Wright in OREB’s March 2021 update.

Here are some important numbers:

The Ottawa Real Estate Board has published that the price growths are purely a result of long-term inventory shortages and won’t cool until all three levels of government intervene. If you look at the cost of building supplies and the popularity of our community for its affordable housing, as well as the lack of punitive taxes for foreign investors, this also helps explain the continued record-breaking gains in the housing market.

The market is changing from week to week, so please don’t hesitate to reach out to our team directly to help you pinpoint the time to make an offer or list your home for success.