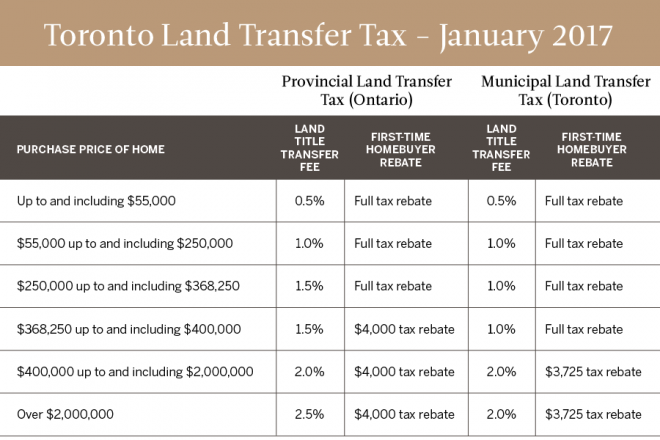 Here are the changes:

Ultimately these changes are expected to have negative implications on transactions over $2 Million which, in the City of Toronto, represents a large part of the real estate market for centrally-located detached homes.

The City of Toronto is currently exploring raising the Municipal Land Transfer Tax in order to meet 2017 budget objectives. The effect would be an additional 0.5 per cent of tax on all buyers.

This could mean a seven per cent increase of $750 on top of the $11,000 for an average priced home purchased by a repeat buyer in Toronto.

Tim Hudak, CEO-designate of the Ontario Real Estate Association (OREA) said that if the city increases the municipal land transfer tax, it would effectively be “clawing back” the additional rebate offered by the province. Hudak says, “Unfortunately, Toronto is proposing to swipe up to 25 per cent of the provincial savings out of the pockets of young couples and put it into city coffers instead.”

Toronto Real Estate Board has launched a website to combat the City on the increase of land transfer tax.

Toronto City Council will finalize its budget in February 2017.

Would you like to be kept informed on the latest in Toronto Real Estate? Contact a member of our team to be kept in the loop or sign up for our monthly real estate updates today.